Oachira temple is an ancient temple located in Oachira in Kollam district. The temple is dedicated to Parabrahmam, also called as the Omkaram, the universal consciousness.

The temple is very unique as it practises worship without an idol, and reveres the supreme force of Nature. Unlike other temples, Oachira temple does not have any covered structure and people worship the Parabrahmam under the trees. There is a strong belief that the name Oachira is derived from Uvachanchira, which means Lord Shiva. 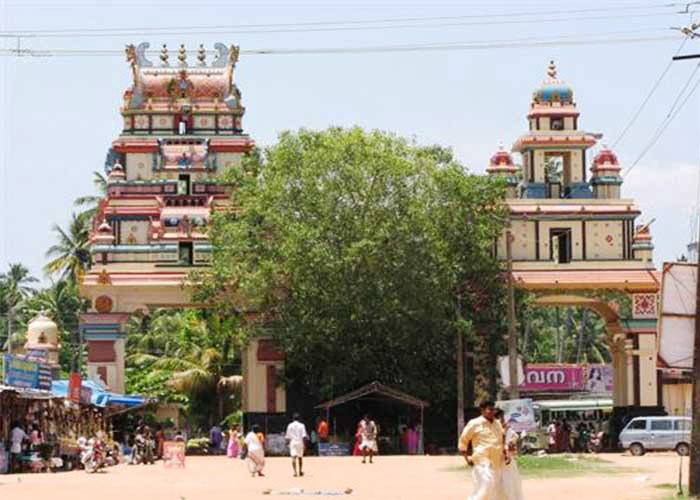 The temple is dedicated to ParaBrahma, who is better known as Shiva or Ohmkaram, which is the Universal Consciousness. This means that the temple has no fixed or prescribed mode of worship and that consciousness is given the highest value here. The temple thus propagates the message of universal brotherhood and spirituality.

The fact that the temple has no specific structural layout again adds on to this ideology that it upholds. Spread over thirty-six acres of land, the majestic temple witnesses a massive footfall of tourists and pilgrims daily, who belong to all sects and religions; and visit to seek blessings from the almighty irrespective of their faith.

The annual Oachira Vrischikam Festival is celebrated during the months of December and January. The temple is famous for two other unique festivals. The Oachirakkali ritual is performed in June in which traditional martial art experts conduct mock fights with each other in muddy water. The Irupathattam Onam (28 days after Onam) is a festival in which giant effigies of bulls, made of cloth and hay called Eduppu Kala, are pulled on giant platforms fitted wheels to the temple. It is one of the biggest festivals in the region.

The Oachira Temple has no covered structure that can be used as a place of worship. Even though the temple covers an area of 32 acres, there is no walled enclosure or sanctum sanctorum inside the premises. Devotees worship the Para Brahma, which is the original power of Lord Shiva that also happens to be formless, under preserved trees that have been neatly managed. The front part of the complex, however, comprises of two fifty feet high towers, or gopurams; which are carved with various ancient sculptures. These pillars, along with the East Nada, West Nada, Theerthakkulam (sacred pond), Ondikkavu, Ayyappa Temple, Mahalakshmi Temple and Ganapathi temple, form the main points of worship at the temple.

The Oachira Vrischikam festival takes place at the Oachira Temple every year in December and January. Another famous ritual performed here is known as Oachirakkali, which takes place in June. Traditional martial art experts indulge in mock fights in muddy water and paddy fields during this festival. This festival was originally a war exercise that was performed each year by the soldiers of Kayamkulam Raja. These soldiers met at Oachira in the Malayalam month of Mithuna every year, and this practice began to be known as Oachirakkali. Gradually, the annual tradition developed into a full-fledged festival that is celebrated with great gusto these days.

The main festival celebrated at the temple is called ‘Panthrantu Villaku’ (twelve lamps). These celebrations start on the first day of Vrischikam (Malayalam era, which falls in the middle of November and goes on for 12 days.

Note: Pooja Timing May Vary on Festivals and On Special Days